Shrewsbury is an historic market town with the town centre having a largely unaltered medieval street plan. The town features over 660 historic listed buildings, including several examples of timber framing from the 15th and 16th century 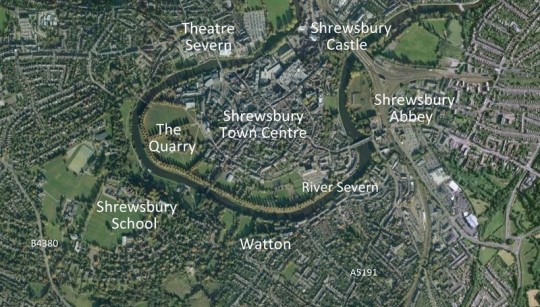 Shrewsbury town centre is an 800m walk which is a pleasant stroll through the Burrs Field and across the Kingsland Bridge over the River Severn. The town centre is the retail hub of Shropshire's county town, and includes lots of national retailers along with a range of independent local shops

The river loop is a 150m from Watton and sweeps around the town centre providing for pleasant evening walks. The Sabrina River Boat offers day and evening trips along the river

This is a 29 acre park set on the banks of the River Severn created in 1719. The Quarry accommodates a variety of events throughout the year including the Shrewsbury Regatta, Concerts and a Circus

Most famous for the ‘Cadfael’ TV series, the Abbey was founded in 1083 as a Monastery

The town includes a number of old fashioned Pubs serving acclaimed Real Ale, with others such as the Armoury and Mad Jacks offering a more sophisticated atmosphere

There are a range of chain restaurants including Zizzi’s, Loch Fyne, Ask and Nando’s. However Shrewsbury also hosts some very pleasant independent Restaurants and we can point you in the direction of one which suits your dining preferences

Held in the Quarry in August every year, this is the longest running flower show in the country and worth a visit. The next event is on the 8th and 9th August 2014

First held in 2013, the race takes you through the historic streets of Shrewsbury and runs past our front door !! The next race is on the 22nd June 2014

Now a regular event in The Quarry, the Food Festival takes place on the 28th and 29th June 2014

This is staged in the West Midlands Showground in Shrewsbury and was held in May in 2014. The date for 2015 is not yet released